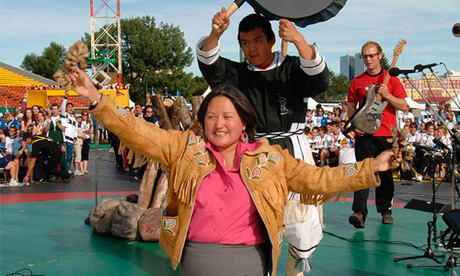 Sharon Shorty lives in Whitehorse and is from the Tlingit, Northern Tutchone and Norwegian people. She is from the Raven Clan and was raised with the storytelling tradition of her southern Yukon community.
As a result, she strives to share stories in various genres. Her popular character Grandma Susie tells the old stories as well as her adventures with Colonel Sanders and trips to New York City.

In television, she has worked as a story producer: telling stories on arts and culture. As a playwright, her stories reflect her people.
Currently, she is the founding Artistic Director for SYANA Performing Arts (The Society of Yukon Artists of Native Ancestry).


Photo © Government of Yukon
Powered by